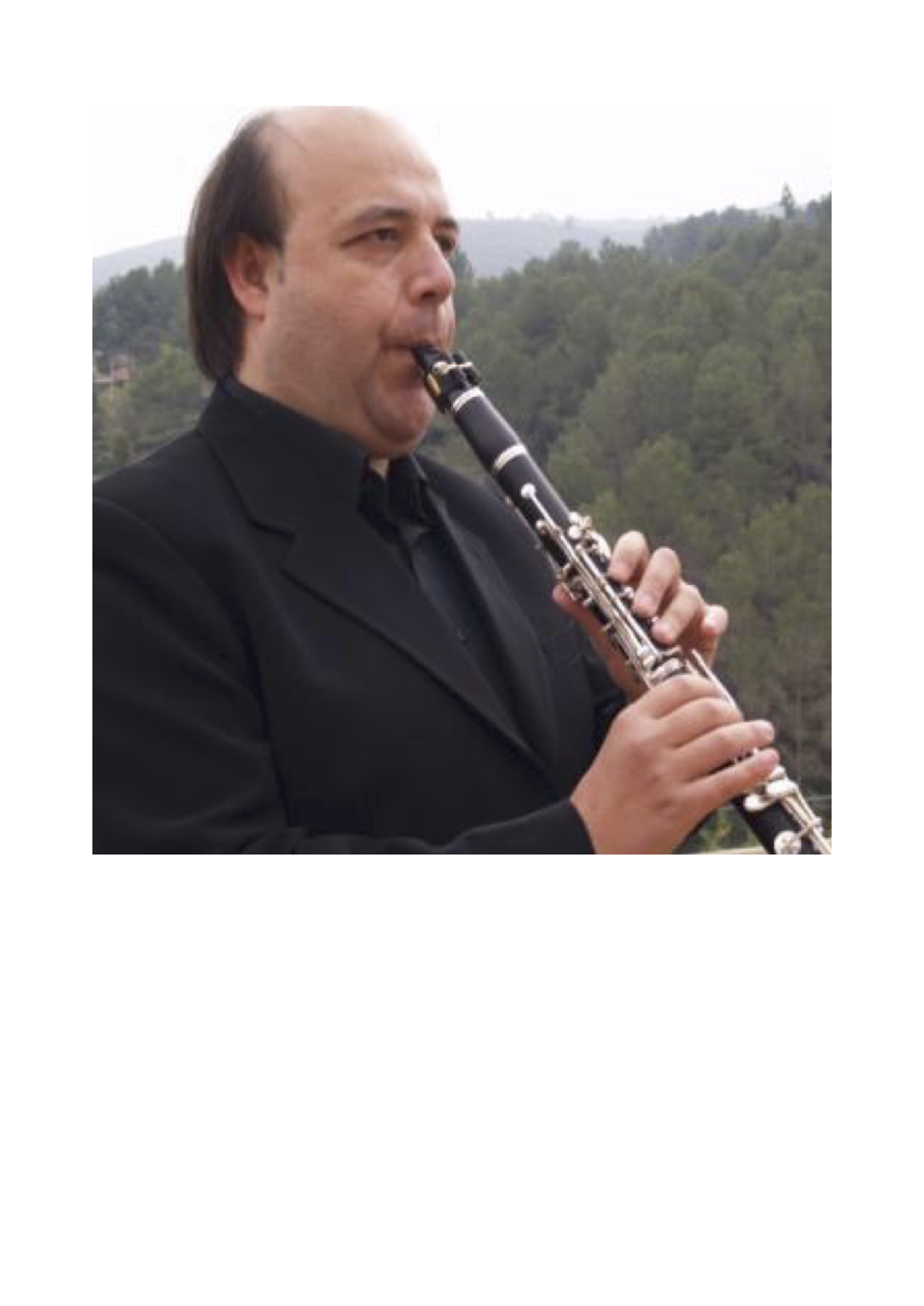 Born in Albaida ( Valencia, Spain ). He studies the clarinet with the professors Juan Vercher and Lucas Conejero at the Superior Conservatory of Valencia and at a later time, at the Real Superior Conservatory of Music of Madrid with Vicente Peñarrocha, getting in this center the Superior Title from the specialty, with Excellent grade. He has attended to several master classes with international professors Walter Boeykens, Colin Bradbury, Joan Enric Lluna, Anthony Gigliotti, Karl Leister, Yehuda Gilad, Michèle Zukowsky, Hans Deinzer, Anthony Pay, and specially with Enrique Pérez Soloist ONE.

Born in Albaida ( Valencia, Spain ). He studies the clarinet with the professors Juan Vercher and Lucas Conejero at the Superior Conservatory of Valencia and at a later time, at the Real Superior Conservatory of Music of Madrid with Vicente Peñarrocha, getting in this center the Superior Title from the specialty, with Excellent grade. He has attended to several master classes with international professors Walter Boeykens, Colin Bradbury, Joan Enric Lluna, Anthony Gigliotti, Karl Leister, Yehuda Gilad, Michèle Zukowsky, Hans Deinzer, Anthony Pay, and specially with Enrique Pérez Soloist ONE. He was selected in 1990 by L’Orchestre d´Harmonie du Jeunes of the CEE, sponsored for the European Union, accomplishing a tour of concerts in Luxembourg, Germany, France and Belgium. He has performed in the principal cities of Spain , and the most important places like Auditorio Nacional, Fundación Juan March, Círculo de Bellas Artes, National Museo of Arte Reina Sofia in Madrid, Palau de la Música, Museo of Beneficence ,Museo Príncipe Felipe, Diario Club Levante ( Valencia ), Palacio of Revillagigedo Gijón, Teatro Juan Bravo and Alcázar of Segovia, Paraninfo of the University of Valladolid, Teatro Principal Palma Mallorca, Auditorio Cajamadrid Barcelona and also in Lisboa, Oporto ( Portugal) and Bratislava, Zilina, Tverdosin, Karlovy Vari ( Slovakia ). He has participated several times with The National Orchestra of Spain, with the Orchestra Reina Sofia, the Symphony Orchestra of the Mediterranean, Symphonic Orchestra of Alicante and with the Orchestra of Torroella’s International Course of Montgrí, conducted by Anthony Witt, Max Bragado, Enrique García Asensio, Joan Iborra and Rodney Friend. He has performed as soloist with the Camerata of Madrid, the Alicante’s and Albacete’s symphony orchestra , playing works of Mozart, Weber, Piazzolla. In the year 2004 he gives a première “ Scherzo i Rondó “ for clarinet and strings, written specially for him,by Ramón García Soler. Rafa founded and played as principal clarinet with Albacete’s Symphony Orchestra, from 1996 to 2000. In 2006 he also founded and played as principal clarinet with Llanera Philharmonic Orchestra. He has won some prizes, the most important are, Second Prize in the Caceres Competition for winds; and finalist in Competitions of Juventudes Musicales in Spain for soloist and chamber music. His ambition to explore new music has also led him to collaborate with important composers, and gives a prèmiere : L.Angel Rodríguez, Juan Méndez, Javier Artaza, Carlos Cruz de Castro, Flores Chaviano, Tomás Marco, José M García Laborda, Jesús Torres, David del Puerto, Santiago Lanchares, Jesús Legido, Marisa Manchado, Lola Fernández, Ramón Pastor, Sebastián Mariné, José M Bru, Marcela Rodríguez ( Mexico ), Orlando J. García ( United States ), Patrick Burgan ( France ), James Dashow (EEUU). He recorded for RNE, Canal Nou Tv, Radio Clásica, Localia TV ( Spain) and Radio Saarbrücken ( Germany ) In 2002 recorded for M.L.Producciones the Quintet for clarinet and quartet strings composed by Rafael Rodríguez Albert, this CD was presented at the Contemporary Music Festival of Alicante. In 2007 recorded the CD Albarís “Camera Music of Contemporary Compositors” from Valencia. In 2008 recorded the CD “ Vocabularis “ with music for Clarinet Quartet called “ atempo “ with works of Valencian and Catalan composers, some works written specially for this group. Rafa Albert is a distinguished pedagog, being frequently invited to instruct courses and master-classes thoughout his country, Xátiva, Albacete, Alicante, Lorca, Archena, Gandía, more over he was the founder of the musical courses” Ciutat d´Albaida “. He is the Artístic Director of the International Course “ Clarinetíssim “ it takes place each summer and invites every year the most important Spanish or International Clarinetists. He has been a member of the jury in national competitions for clarinet, winds, bands. He is a member of the International Clarinet Society and ADEC of Spain. He held master classes concerts and gave lectures in the years 2000-2001at different Universities and Spanish Conservatories a round the Music of the Spanish composers, sponsored for the INAEM. He has accomplished a Master’s Degree about “ Esthetics and Musical Creativity” – 3ª Edición, organized by the University of Valencia. He is in possession of the Diploma of Graduate Studies ( D.E.A.) University of Valencia. He has been a director of different bands of music, clarinets ensembles, in Valencia and Alicante. It belongs to for opposition as a Teachers In a Faculty of Música and Performing Arts in Clarinet’s specialty of the MEC from 1989, working at Soria’s Conservatories, Segovia, Albacete, Ontinyent and for opposition as a Cathedra of Clarinet´s specialty from 2016, working at Música’s Real Superior Conservatory of Madrid, Superior Conservatory of Música Joaquín Rodrigo of Valencia and currently teaches classes of Clarinet at the Superior Conservatory ” Oscar Esplá ” of Alicante, at the same time he goes on a camerístic work with different groups: Duo CLAC ( Clar.Piano ), Trio Kontrasts ( Clar, Violín, Piano ),Trio Mendelssohn ( 2 Clar and Piano ), Trio Spohr ( Clar, Singer and Piano ), Quartet of Clarinets “atempo“, Spanish Quintet ( Clar and Quartet of Strings ), Contemporary Música’s Ensemble “ Nous Sons “.

*you need to be logged in as a registered user